I’ve had a few people wanting to have electric guitar string gauges explained, your wish is my command! I’ll stick to 6-string sets here and focus on electric guitar string sets as that covers most people. The principles are exactly the same. The only thing that would be different for acoustic, bass, 7-string, and 12-string guitars is the actual strings included in the sets.

String gauge refers to the thickness or diameter of the string – the smaller the number, the thinner the string.

Everything you’ve ever wanted to know:

What is string gauge?

Like said before string gauge refers to the thickness or diameter of the string – the smaller the number, the thinner the string. It’s that simple!

If you ever needed or wanted to measure strings, you’d probably need to use something like a digital micrometer which would be able to measure this for you but be careful to use the inches number, not fractions or millimeters.

What do the numbers and “W” mean?

The numbers you see on string sets or individual string packets refer to 1000’s of an inch. The confusing bit (unless you’ve read this article, of course) is that they can be written in a few different ways, but they all mean the same thing.

Different manufacturers may refer to this in different ways:

They all mean the same thing – that is, a string that is 9 1000’s of an inch in thickness/diameter.

The good news is that a manufacturer will use the same convention for all strings in that set, so there is no confusion once you understand the naming convention that is in use. Actually, as we’ll see, most sets are pretty well defined so once you get used to the numbers you are looking for, it would be very hard to make a mistake.

If you see this after a string gauge, for example, 026W or 26W, it means the string is wound like most strings on the low E, A and D strings are. No “W” means it is a plain string like most high E and B strings are – for example, 013.

Now you understand this, life gets a little easier because you get sets that have names that immediately define the gauges of all the strings in that set…

What do the names of string sets mean? (like slinky, regular slinky, hybrid slinky etc)

Different manufacturers have different naming conventions, but they are consistent within their own range.

I’ll talk through the Ernie Ball sets here, D’Addario, Fender, Elixer all have their own naming conventions.

Of course, if in doubt, look at the detail to find out what the gauge is of each individual string.

As stated, other manufacturers will have different names for their sets and slightly different contents as well.

D’Addario for example do loads of different sets, 09-42 and 10-46 tend to be standard, but D’Addario also have a concept of “plus” where they make sets that are exactly halfway between!

The main thing is, find what you are comfortable with and understand the pros and cons of each set, and, most of all, experiment!

Why have different gauges at all?

There are two answers to this.

When talking about individual strings

Within a set, each string needs to give a similar feel whilst tuned to different notes.

Basically, the thinner the string, the higher the note at a given tension.

On your guitar, you have two E strings and they are tuned two octaves apart (hopefully!). The E string with the high note is much thinner than the low E string, right? But yet, they have similar tension to them…

This helps playability but also keeps the tension on the neck and bridge even across the fretboard.

That’s it – nothing more to it than that.

There are pros and cons that act as trade-offs for sound and playability that will influence whether you go for light (thinner) or heavy (thicker) strings.

I’ve summarised these below, but there really is no substitute for trial and error.

Ultimately, it’s your choice, but here’s a couple of hints! 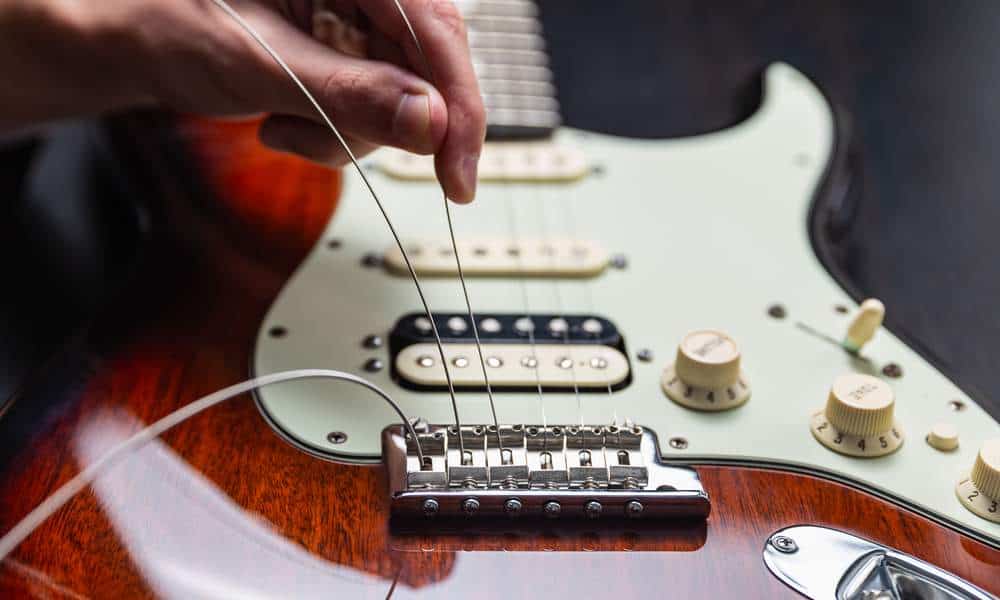 How do I know what gauge I have on my guitar?

Most experienced guitarists will know the gauges of strings on their guitars, but if you don’t, most guitars will be set up using the super slinky or regular slinky gauges, so go for these if you’re not sure.

Of course, you can always get a digital micrometer that will tell you exactly what you have on your guitar!

In the meantime, here is a very rough guide on how some of the main guitar manufacturers set up their guitar from the factory, but there are so many variations, I suggest that you research your own particular model.

What happens if I change the gauge of strings I use?

Obviously, if you change your string gauge you will start to see some of the trade-offs I talked about above.

But, in some cases, you may need to tweak your guitar’s setup.

If you have a fixed bridge guitar (like a Telecaster), you will largely be fine unless you are doing something really drastic!

Guitars with floating bridges (for whammy bars) will need a little more setup. In the main, you will just need to tighten up (for heavier strings) or loosen off (for lighter strings) the springs of your floating bridge from the back to equal out the changed tension in the strings.

If you are not confident with this, please take your guitar to a guitar tech (sometimes called a Luthier) and get it done professionally.

I won’t go into detail on these tweaks here (that’s an article in itself), but most of the time, you really won’t need to do much at all if anything.

String gauge choice is personal and you may even choose different gauges on different guitars.

I hope this article has helped you understand more about this and provided some direction on what you might want to try next.

I always welcome comments, so if you have any questions or want to share your own thoughts, please feel free to post them.

And there you have it, electric guitar string gauges explained

Hobbyguitarist.com is a participant in the Amazon Services LLC Associates Program, an affiliate advertising program designed to provide a means for sites to earn advertising fees by advertising and linking to Amazon.com.