Here is my take on how to use a Capo on the guitar and why you might do so. I’m going to get the controversial bit out of the way first!

How is capo pronounced?

Depending on the kind of capo you have it typically has some sort of bar that goes on the strings. A strap or a clamp that goes round the back of the neck of the guitar and fastens to keep the capo in place. 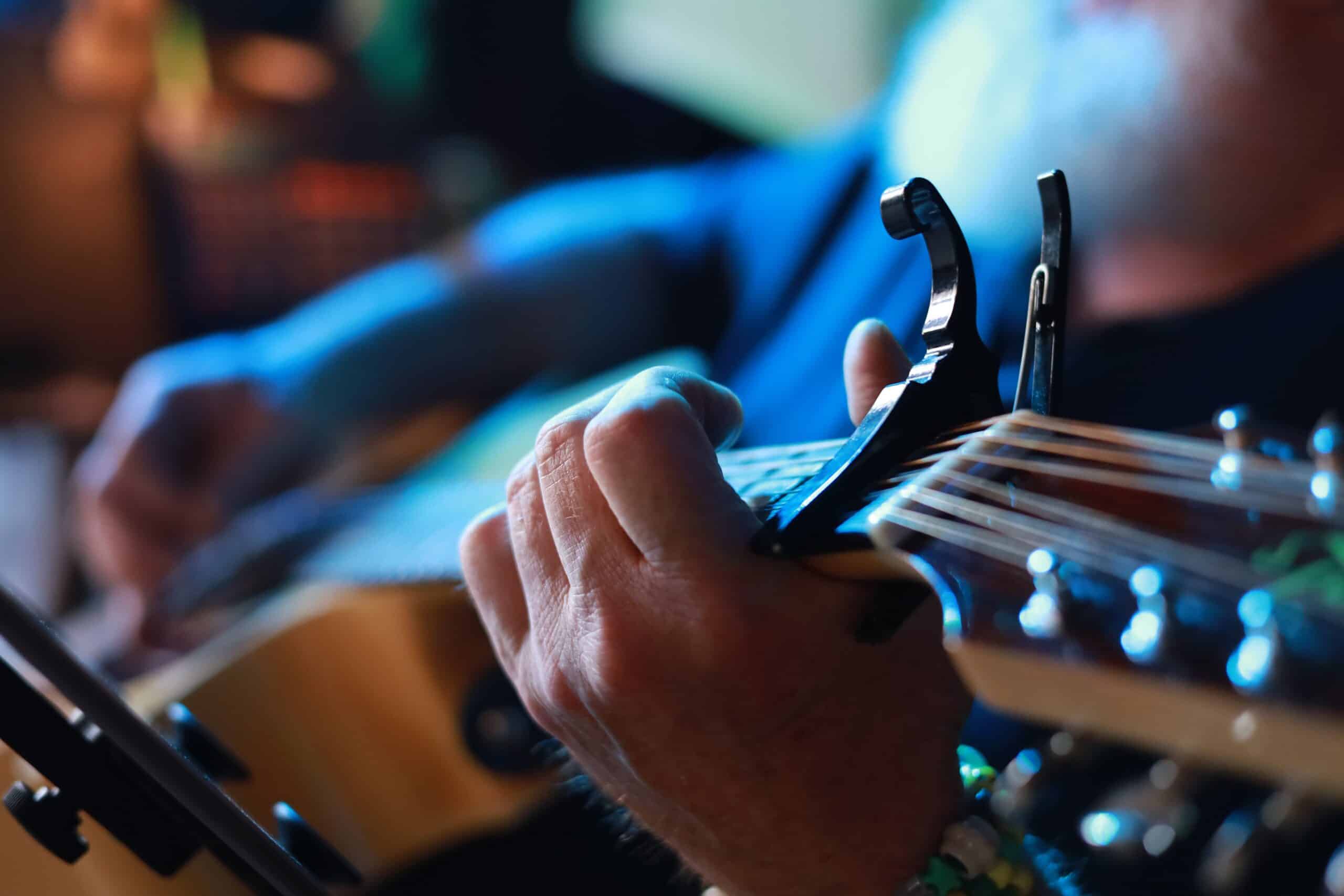 What is the capo used for?

(No matter how it is pronounced!)

A capo is really a way of forming a temporary barre so that open chords and strings are higher in pitch and have a new key reference on the guitar.

Put another way, it is like moving the nut of the guitar further up the neck (towards the body and away from the headstock).

If you know how to play barre chords, your finger that is forming the barre across the strings is actually acting a bit like a capo while you play that chord.

How do you attach a capo to the guitar?

A capo typically has some sort of bar that goes on the strings and an elastic or other strap that goes round the back of the neck of the guitar and fastens to keep the capo in place.

There are variations using hinged mechanisms and thumbscrews to tighten, but the principle is the same – it rests on the strings forming the new reference key and attaches to the neck around the back of the neck of the guitar.

Keep playing the strings occasionally as you adjust the position of the bar of the capo to get the clearest sound you can.

Also, attaching too tightly will actually force the strings down over the fret so much that you will put the guitar out of tune.

The pressure on the strings just needs to be enough to stop the strings from rattling or buzzing on that fret and yet sufficient to get a clear tone from the strings.

Why Would You Use A Capo?

Capos are used mostly on acoustic guitars, more often than not, to raise the pitch of a tune using open chords or strings to match someone’s natural voice register. The capo simply changes the key of the open strings.

But something else happens as well, and this is just my opinion, but it gives the guitar a slightly different tone which I think of as a more folk tone when used on acoustic guitars.

Scarborough Fair by Simon & Garfunkel is a classic example of the use of a capo and is a terrific song as well.

What is it with that tune, I find it pleasing, melancholic, and haunting all at the same time – what do you think?

Let’s just ignore that there is considerable doubt over the originality of this song and just enjoy it for the great tune it is.

The capo is being used just behind the 7th fret which effectively tunes the guitar to B tuning (if E is regular tuning, then the 7th fret of the E string is B). I.e., the “open” strings are now from where the capo is positioned and are B, E, A, D, F# and B (thickest to thinnest) – bingo, you’ve got a guitar tuned up by 7 semi-tones.

If you are predominantly an acoustic guitar player, then you’ll probably need or want to use a capo at some stage.

So I really hope you now know how to use a capo on the guitar and what it is used for as well as how to attach one in the right way.

Hobbyguitarist.com is a participant in the Amazon Services LLC Associates Program, an affiliate advertising program designed to provide a means for sites to earn advertising fees by advertising and linking to Amazon.com.