Learning how to read guitar tab might look a bit scary, but it is made easy as long as someone explains the basics to you – and that is exactly what I’m going to do here. By the end of this post, you will be able to read and play a guitar tab, that’s a promise to all you hobby guitarists out there!

Exciting isn’t it? Because, once you can read and play guitar tab, you can start learning all those songs, riffs, scales – in fact whatever you want.

Just one note of caution though, before we move on. Because anyone in the world can produce and publish guitar tabs to the internet, you get various styles of tab, you also get various quality of tab and some are just wrong. The worst thing is, there is often no way to tell until you have wasted time deciding which version to use and then trying to read it.

Because of this, I recommend guitar tab produced in a consistent way by professional musicians. Or you could go to Ultimate-Guitar They have some great tabs, just make sure you’re always choosing the one with the most/highest rating. 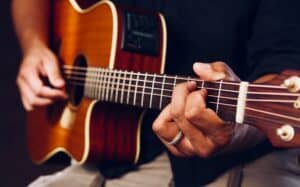 What is Guitar Tab?

Well, it’s a visual representation of the fretboard showing information on how each string should be played. This means that no knowledge of formal music notation is required (although some guitar tabs will show this as well).

You should be aware right now, that most guitar tabs will not show you which fingers to use – this is left for you to figure out for yourself – doh!

Let’s get straight into guitar tab basics with a blank tab that would look like this:

Look at the letters on the left edge, these are representing the tuning of the strings on your guitar.

You have to imagine yourself holding the guitar in the normal way and that you are bending your neck forward looking down at the fretboard. The E string at the top of the tab is representing the thinnest string on your guitar. Stop a minute to get this fixed in your mind, it’s really important…

So, just to re-iterate, with the guitar held as if playing, looking down on your fretboard, you would see the strings in the order in which you see them on the blank tab above.

Ok, got that? Really get this fixed in your mind it is essential.

This is what the vast majority of guitar tabs will look like (with a bunch of numbers and symbols scattered along the strings, yes, but hold your horses, I’m getting to that!)

Of course, if you are asked to use a different tuning or you have a 7 or 8 string guitar, the guitar tab will look different – but let’s just ignore that for now.

Here we go then, a simple guitar tab, where I explain the most fundamental part of guitar tab.

Just to remind you, this is showing you which fret numbers to play on the different strings – and the order in which to play them.

Really important – The most vital bit of information to de-mystify guitar tab – left to right here represents time – that is, the sequence of the notes. They are also evenly spaced which means play them in a steady beat.

It’s vital because it might look like the fingers go steadily further up the neck of the guitar and that is not the case. The fret numbers show you where on the neck, the positioning left to right shows the sequence of the notes over time.

So, this tab is showing you to play (in this order):

Fret numbers start at 1 being the fret next to the nut of the guitar (0 means play the string open).

Remember, when I say play the 5th fret, I actually mean place the finger just behind that fret so that the 5th fret becomes the point from which the string will vibrate.

Also, there is no indication of which fingers to use on tabs you have to do this yourself (For this tab, I would use the index finger on the 5th fret and ring and pinky on 7 and 8 respectively).

If you don’t recognize this, it is in fact the A minor pentatonic scale in first position followed by a D power chord and finishing with an A power chord!

Here are the more common, and more or less standard, guitar tab symbols:

Here is a worked example:

Notice as well, the spacing is showing that some portions of the lick have a gap between notes. It is trying to indicate the timing of the lick. This is where tab struggles and you have to take the raw information and make it sound “right”.

It’s great though, isn’t it? You can now easily find out how to play all those songs you love and to learn licks and riffs, new ways of playing scales – the world is open to you!

What Are Some Other Variations in Guitar Tab?

Guitar tab is pretty standard, but many authors will put additional information and symbols on their tabs.

Here are some examples:

My best advice is to read tabs one section at a time and play on your guitar as you go; start off with tabs for music you know so that you will hear if you are reading the tab correctly or not before tackling anything new.

Tab becomes easier the more you read, so try to find high-quality tabs for songs you know to start with and build from there.

The final bit of advice here – take each section of tab one at a time rather than looking at the entire thing. Each section will be no more complicated than the example I gave above, it’s just that if you see section after section like this, it starts to look fairly daunting – just break it down, one part at a time. 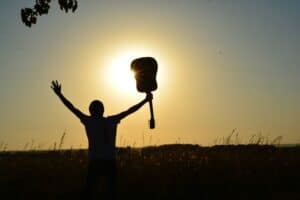 What Are The Limitations of Guitar Tab?

And so, I hope you now have a good idea how to read (interpret?) guitar tab.

Remember, it really came about as a way of writing down guitar music without the need for the reader to understand sheet music.

There are massive limitations however, and the only real way of overcoming these limitations is to trust your ears.

Here are some examples of what guitar tab will not tell you and possible things to think about to overcome them:

And there you have it. A rough guide to reading guitar tab from guitar tab basics through to being able to play your favorite songs.

I really hope this has helped you out and you now know how to read guitar tab and can start to explore the many resources available.

1 thought on “How to Read Guitar Tab (Helpful Examples)”